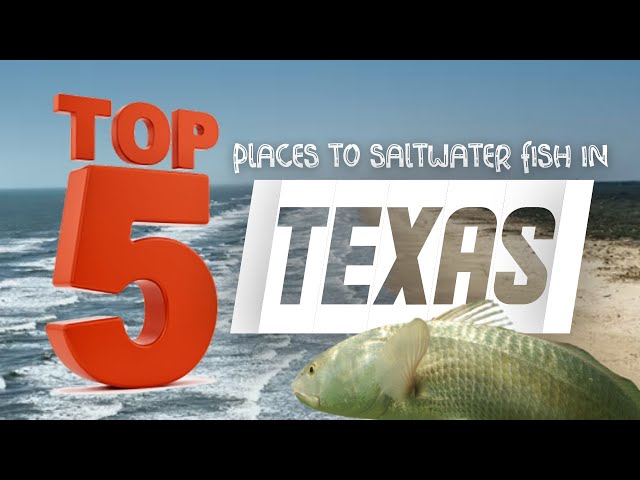 Redfish are one of the most popular game fish in Texas. A member of the drum family, redfish have a long bodies with a deep reddish coloration. They are found in coastal waters and can grow to be quite large, with some fish weighing over 50 pounds.

Redfish are often caught using live bait, but they will also take artificial lures and flies. When fishing for redfish, it is important to use heavy tackle as they are powerful fighters. Redfish are good to eat, and their popularity as a game fish means that they are often harvested for commercial purposes as well.

Speckled trout are found along the coast of Texas in bays and estuaries. They spawn in the Gulf of Mexico from March through August. Females can lay up to 3 million eggs per season. Speckled trout grow quickly, with most fish reaching 18 inches by their first birthday. The Texas record speckled trout weighed 13 pounds, 8 ounces and was caught near Galveston in 1998.

Speckled trout feed on a variety of baitfish, shrimp, and crabs. Common baitfish include mullet, menhaden, pinfish, and croakers. The best baits for catching speckled trout are live baitfish or piggish-type lures that imitate injured baitfish

Flounder are a popular saltwater fish found in Texas waters. There are two types of flounder found in Texas, the Southern flounder and the Gulf flounder. Flounder can be found inshore, in bays and nearshore, in the Gulf of Mexico.

Flounder are ambush predators and lie partially buried in the sand or mud with just their eyes and mouth protruding. When a hapless fish swims by, the flounder sucks it in whole. Flounder have both eyes on one side of their body which allows them to better hide on the bottom and surprise their prey.

Flounder are popular among anglers because they are good to eat. Flounder fillets are white and delicate with a mild flavor. Flounder are typically fried, but can also be baked or grilled.

If you’re fishing for flounder inshore, use live bait such as shrimp or minnows. Nearshore, live bait or cut bait will work. In the Gulf of Mexico, squid or cut bait is typically used. Whatever bait you use, be sure to fish it on or near the bottom where the flounders lies in wait for its next meal.

Snapper are found around the world in tropical and warm-temperate waters, with most species living in Marine waters, though a few inhabit brackish and freshwater environments. The largest snappers grow to over 2 meters (6.6 ft) long and 60 centimeters (2.0 ft) in width, but most species are much smaller, being only about 30 centimeters (1.0 ft) long on average. Snappers are carnivorous fish, feeding primarily on small fish, squid, shrimp, and crabs. They use their keen vision and sense of smell to seek out prey. Snappers have strong jaws with sharp canine teeth for slicing flesh from their prey
-Red Snapper
-Lane Snapper
-Mangrove Snapper
-Yellowtail Snapper

Kingfish, also known as king mackerel, are one of the most popular game fish in the Gulf of Mexico. They are known for their delicious flavor and their fight when they are on the line. Kingfish can be found in waters around Florida, but they are most commonly caught off the coast of Texas.

Kingfish are a migratory species, so they can be found in different parts of the Gulf of Mexico at different times of the year. In the spring and summer, they will be found closer to shore. In the fall and winter, they will migrate offshore to deeper waters.

Kingfish are relatively easy to catch, but they can be finicky eaters. They will often bite on live bait fish, such as menhaden or sardines. Kingfish can also be caught on lures and jigs. When fishing for kingfish, it is important to use heavy tackle because these fish can weigh up to 40 pounds or more!

If you are lucky enough to catch a kingfish, you will want to remove the dark strip of meat from the side of the fish before cooking it. This strip is called the “bloodline” and it can make the fish taste bitter. Once you have removed the bloodline, you can cook your kingfish in a variety of ways. Grilling or smoking are both popular methods of cooking kingfish that will result in a delicious meal that your whole family will enjoy!

Dorado, also known as mahimahi, is one of the most popular pelagic sport fish in Texas. It is a spectacular fish that puts up an impressive fight when hooked. Dorado are found in offshore waters around the world and are known by different names in different parts of the globe, including dorado, mahi mahi, and dolphin (not to be confused with the mammal of the same name). The Texas record for dorado is 87 pounds, 8 ounces, caught off Port Aransas in 1961.

Tuna are found in saltwater, but the fish can migrate between different types of habitats. Tuna spend their time at the water’s surface, in the midwater region, and even near the bottom. Some species of tuna can live in freshwater lakes. All tuna are fast swimmers. Some tuna can swim up to 50 miles per hour!

Tuna are often caught by commercial fishermen. Sport fishermen also like to catch tuna. Tuna are popular because they are good to eat. Tuna steaks are a favorite food of many people. Some species of tuna are also used for making canned tuna fish.

There are about 20 different species of tuna. The most well-known species is the bluefin tuna. Other popular species include the yellowfin tuna, albacore tuna, and bigeye tuna.

Sailfish are billfish living in warmer sections of all the oceans, mostly in tropical waters. They are blue to gray in color and have a characteristic long, erect dorsal fin. www.sportfishingtexas.org They often swim in schools near the surface and hunt using theirbill to stun, wound, or kill prey. Sailfish grow quickly, reaching an average size of six feet within a year of birth

Marlin are a family of large, fast-swimming fish found in warm ocean waters. There are several species of marlin, but the two most common are the blue marlin and the white marlin. Marlin are prized by sport fishermen for their speed and fight, and they are also a popular target for commercial fisheries.

Marlin are long, slender fish with sharp teeth and a pronounced dorsal fin. They are dark blue or black on the back and sides, with a white or light-colored belly. Most marlin have a dark stripe running along their side, just behind the gill plate. Male marlin are typically larger than females, and can reach lengths of 15 feet (4.6 meters) or more.

Blue marlin is the largest and most well-known species of marlin. It is found in tropical and subtropical waters around the world, and can grow to lengths of more than 14 feet (4 meters). Blue marlin are blue-black on the back and sides, with a white belly and light-colored stripes running along their sides. Females are typically larger than males, and can weigh up to 2000 pounds (900 kilograms).

White marlin is smaller than the blue marlin, but is otherwise similar in appearance. It is found in warm ocean waters around the world, and can grow to lengths of up to 11 feet (3.4 meters). White marlin have a dark blue-black back and sides, with a white belly and light-colored stripes running along their sides. Like blue marlin, female white marlin are typically larger than males