The Texas Acro Sport II is a great aircraft for those who are looking for a fun and affordable way to get into the sport of acrobatic flying. 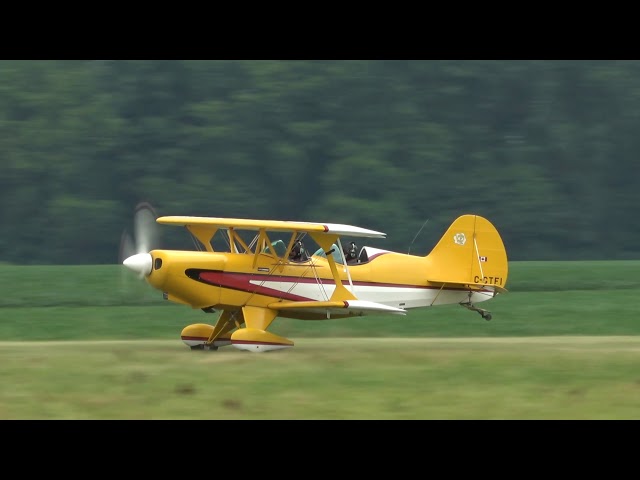 The Texas Acro Sport II is a high-performance, single-seat aerobatic aircraft that was first introduced in 1984. It is powered by a 100 hp (75 kW) Continental O-200 engine and features a low-wing design with tips that fold up for storage. The aircraft is constructed of all-metal materials, with the exception of the canopy, which is made of fiberglass.

The Texas Acro Sport II is approved for aerobatic maneuvers including loops, rolls, spins, hammerheads, and Cuban eights. It is also approved for limited inverted flight. The aircraft is typically used for training and competition flying, as well as general aviation and personal use.

The Texas Acro Sport II is a single-seat, low-wing, all-aluminum monoplane powered by a 100 horsepower (75 kW) Continental O-200 engine. It was designed in the United States in the late 1970s as a kitplane and is still being produced by Texas Aeroplastics Ltd. in Valley View, Texas.

The aircraft was designed by Bill Husfeld and Scott Thomas of Purdue University while they were working on their aircraft engineering degrees. They formed a company called T&H Aircraft to produce the kit. The prototype first flew in June 1979. T&H Aircraft became bankrupt in 1981 and production was taken over by Texas Aeroplastics, which has continued to produce bodies and parts for the kitplanes. As of March 2014, there were 97 Acro Sport IIs registered with the FAA in the United States.

The Texas Acro Sport II is a single-seat, low-wing, all-metal aircraft with tricycle landing gear. The design incorporates an energetic flying wire braced wing. The strength and safety of this design was proven in the original Acro Sport, which set numerous world records and amassed tens of thousands of flight hours worldwide. The new design improves upon the original in several key ways.

The Texas Acro Sport II is a high-wing, taildragger aircraft with a steel tube fuselage and wooden wing covered with aircraft fabric. The airplane is designed for aerobatic and sport flying. It is powered by a 100 horsepower (75 kW) Continental O-200 engine and has a two-bladed propeller. The aircraft has conventional landing gear with a steering tailwheel. The wing has wood spars and ribs, with aluminum leading edges and tip ribs. The ailerons and elevator are connected to the control stick via cables, while the rudder is connected via rods. The horizontal stabilizer is mounted on top of the fuselage.

The Texas Acro Sport II is an acrobatic biplane designed and built by Acro Sport Inc. of San Antonio, Texas. The aircraft is based on the design of the 1920s-era French Aeronautique Militaire S.E.5 biplane fighter.

The original Acro Sport was designed as a single-seat aircraft and first flew in 1984. The Acro Sport II features a tandem two-seat layout and was introduced in 1986. Both variants of the aircraft are used for sport and aerobatic flying, and are equipped with unconventional flight controls that allow for extreme attitudes and maneuvers.

The aircraft is constructed with a welded steel tube fuselage and wood wing structure, and covered in aircraft fabric. It is powered by a variety of engines ranging from 100 to 160 horsepower (75 to 119 kW). The most common engine used is the 120 hp (89 kW) Lycoming O-235 four-cylinder air-cooled engine.

As of July 2018, 14 Acro Sport II aircraft remain registered in the United States with the Federal Aviation Administration.

The Texas Acro Sport II is an American aerobatic biplane designed and built by the Texas Aerospace company, based in Rosharon, Texas.

As of May 2013, 12 aircraft were registered in the United States with the Federal Aviation Administration.

The Texas Acro Sport II is an American amateur-built aircraft that was designed and produced by Texas Aircraft Manufacturing of Round Rock, Texas. The aircraft is supplied as a kit for amateur construction and is intended to be used for sport flying, aerobatics and primary flight training.

The aircraft design began life as the Acro Sport I, a single-seat high-wing cantilever monoplane designed in the 1930s by August Hedebrandt and first flown in 1932. The Acro Sport II is a derivative of this design, with a second seat added in tandem configuration. The wing design of the Acro Sport II uses a NACA airfoil. The wing has full-span flaperons and dual controls are standard. The landing gear is conventional in configuration with TLS (twist-lock shock absorbers) on the main legs and castering nosewheel. The powerplant options include various rebuilt and new engines of 180to total power driving a two-bladed propeller.

By August 2014 forty examples had been completed and were flying in thirteen countries around the world.

On September 2, 2010, an Acro Sport II, N126EM, was destroyed when it impacted terrain while performing low passes near Middletown Regional Airport / Hook Field (KMWA), Middletown, Ohio. The airplane was operated by an airshow company as a visual flight rules (VFR) local area familiarization flight when the accident occurred near dusk. The commercial pilot and his passenger were fatally injured.

The aircraft was designed by Jim Bede in 1978 and was an improved version of the company’s earlier Acro Sport I model. The aircraft is constructed from wood and aluminium with its flying surfaces covered in doped aircraft fabric. The mainwheels are mounted on cantilever spring steel legs and the tailwheel is steerable. The design features include a lowlanding speed, good rate of Roll and small turning radius.[2]

The Texas Acro Sport II is an American FAI Standard Class aerobatic biplane designed and produced by Texas Aerosports of Austin, Texas. Introduced in 1989, the aircraft was supplied as a kit for amateur construction.

The aircraft is made from conventional aluminum alloy tubing, with its flying surfaces covered in doped aircraft fabric. Its 28 ft (8.5 m) span wing employs a Wickelrumpf construction, with aluminium ribs and spars. The wing has 5° of dihedral outboard of the interplane struts and mounts flaps that occupy 40% of the trailing edge. The cabin features side-by-side seating for two in wicker chairs under a canopy that opens to the port side for entry and exit. Standard equipment includes wheel brakes, wheel fairings and shock absorbers on all landing gear legs. The prototype was first flown on 16 March 1989 and as of July 2013 about 160 examples have been completed and were flying in 25 countries around the world.